I won an award!

If you're anything like me your blogger desktop has recently been inundated with the above picture being handed out from one worthy blog to another, and thanks to the lovely Siobhan (pronounced Shi-vawn, she'll have you know) over at Film Flammers, this honour has now befallen me. Firstly, thanks Siobhan. You can find her blog over here, and I recommend that you too.

Here are the rules:

1. Each person must post 11 things about themselves.
2. Answer the 11 questions the person giving the award has set for you.
3. Create 11 questions for the people you will be giving the award to.
4. Choose 11 people to award and send them a link to your post.
5. Go to their page and tell them.
6. NO TAG BACKS

Hi everyone. Just a little note to say that there may not be an awful lot happening here for a little while, as I'm getting a bit burned out and rushed off my feet with other projects, so much so that I've not actually sat down and watched a film for well over a week now, which is pretty huge for me. Reviews are going to pop up sporadically for a bit (I've got my tickets for The Dark Knight Rises on Friday) but it's unlikely that there will be a Top 5 or anything else for a week or two whilst I get some things settled at home. Sorry about that. Hopefully I'll see you all soon. J
Posted by JayCluitt at 21:00 10 comments:

Top 5... Film-makers I'd like to come out of retirement

This weekend is my parents' joint retirement party (it's a barbecue, so please could everybody hope for at least dry weather), so this week I'm taking a look at those makers of films that have decided not to make them any more, and which ones should come back and improve modern films.

Even though O'Toole only announced his retirement three days ago, and he turns 80 in a month's time, I'm still including him on this list purely because I couldn't think of a fifth film-maker I'd like to come out of retirement. Yes, there are many who I would have liked to have come out of retirement some time ago, but to demand they do so now would be cruel in some states (85-year old Sidney Poitier) and downright impossible in others (Peter Falk). So I'm sorry Pete, but if you fancy having another pop at this acting lark, you're more than welcome. O'Toole is of course most famous for playing T. E. Lawrence in Lawrence of Arabia and Prometheus, but I know him better as the soon departed king in Stardust, King Priam in Troy and as the creaking critic Anton Ego in Ratatouille. He does have the perfect voice for playing Disney bad guys or strict authoritarian elders, and vocal work can't be that taxing, so I feel the door should be left open, just in case he fancies another Pixar cameo. 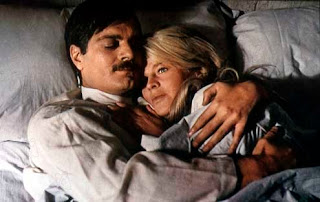 One of those Sunday afternoon sweeping epics that never seems to be off the TV schedule but before the List I'd never seen before (see also The Sound of Music, Gone With the Wind, The Ten Commandments), Doctor Zhivago was a bit of a disappointment.

For starters, it's well over 3 hours long, but very little of that mammoth runtime left any kind of impression. Other than some striking imagery - a splash of blood in freshly fallen snow, a burst of yellow sunflowers against a dull, beige hallway - and a few admittedly impressive set pieces, there's very little from this film that's been committed to my memory banks.
Read more »
Posted by JayCluitt at 20:00 8 comments: 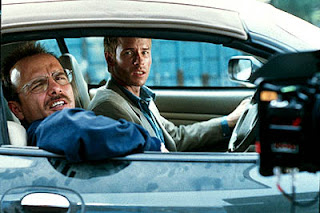 Christopher Nolan's first major picture (after 1998's Following, which is interesting but a tad too confusing, and really for completists only) is at first glance nothing but a gimmick, using a reverse-narrative to tell the detective noir of Guy Pearce's Leonard Shelby as he hunts for the man who raped and killed his wife whilst suffering with a rare condition that prevents him from making new memories. However it turns out that telling the story backwards, scene by scene and with an expositionary telephone conversation spliced in between, is the only way to give the story justice. 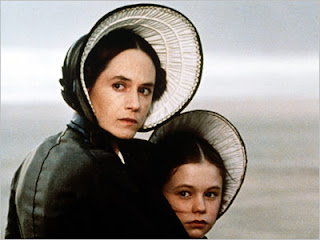 First off, an apology for the forthcoming review. I watched the film three months ago, and have gotten so far behind on my post writing that I've not had any real desire to review it, as to be honest it wasn't that inspirational of a film. Nonetheless, I shall do my best, but I'm relying almost solely on the notes I made during the movie, as I can't for the life of me remember very much of it. As you can probably guess, this isn't going to be much of a recommendation to watch the film.

Holly Hunter plays Ada McGrath, a woman who, aged six, willed herself mute, and has since never spoken a word. She moves from Scotland to New Zealand for an arranged marriage with Sam Neill's landowner/writer Alisdair, and brings her young daughter Flora (Anna Paquin in her first live action picture) and their piano, Ada's pride and joy. Neill is less than impressed with his new bride-to-be ("You're small, I never thought you'd be small"), and refuses to cart her piano across the difficult swampland between the beach and his home, so they abandon it on the sand, much to Ada's discontent. Fortunately local plantation worker George Baines (Harvey Keitel) takes a shine to Ada, and trades some land with Alisdair for the piano, and agrees to trade it back to Ada in return for 'piano lessons,' during which George will get to know Ada far more intimately than she'd like.
Read more »
Posted by JayCluitt at 20:00 5 comments: 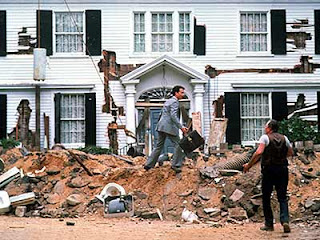 I had high hopes for this film. I'll gladly watch Tom Hanks in anything (I didn't even mind Larry Crowne that much), and it co-stars Shelley Long who, having starred in Cheers, must be good for something. Well, OK, maybe not high hopes, but some hopes that I'd enjoy this film, but alas even those hopes were too high. I understand now why ASDA were recently flogging this DVD for £3. It's not that it's a terribly bad film, it's just confused, contrived and desperately unfunny, which considering it's an 80s comedy, makes it something of a failure.

Hanks is Walter Fielding who, along with his partner Anna (Long), find themselves in desperate need of a place to live after a series of silly  and easily avoidable plot points. When they discover an astoundingly cheap yet extravagant mansion, they buy it with an almost reckless abandon, despite the inevitability of it collapsing upon them. Needless to say, everything that can go wrong with the house does.
Read more »
Posted by JayCluitt at 20:00 No comments:

Born on the Fourth of July 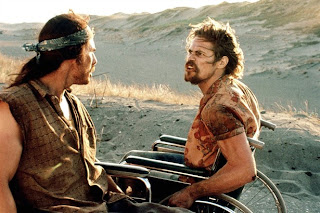 Does anyone else find it funny that Tom Cruise, whose birthday is the third of July, starred in a film called Born on the Fourth of July? No? Just me then.

Olive Stone is one of those film makers that I don't really get. I'm not that much of a Platoon fan, nor can I say I have any affiliation with Wall Street. Natural Born Killers has it's moments, and I can't remember a single scene of Any Given Sunday, though I saw it less than 2 years ago. Other than that, I haven't seen anything he's made, though my hopes are up for JFK, whenever I eventually get around to seeing it. Born on the Fourth of July seems like a typical Stone movie, in that it comes deeply ingrained with a message (war is hell and will mess you up), and though at first glance it may seem patriotic, if you look a little deeper it's really a chance for Stone to voice his own personal feelings about his country.

Top 5... Directors Who Haven't Yet Beaten Their First

Sometimes a director will knock a film out of the park on their first go. This is never a bad thing, unless of course the director then spends the rest of their career chasing a high they may never achieve again. Whether its a matter of a budget they can't handle, an inflated ego, troublesome actors or the interference of a pesky, meddlesome studio, these directors just haven't managed to get things together to relive those past, initial glories.

Frank Darabont - The Shawshank Redemption
There are few people in the world who don't like The Shawshank Redemption, yet it was Darabont's first feature film after just a short and a couple of TV movies. Since its release in 1994 Darabont very nearly reached its heady heights again with the similarly Stephen King scribed The Green Mile, but it was overlong and a tad too depressing at times for my liking. The Majestic is under-appreciated but nowhere near as good, and though I really like The Mist, it can never be more than a slightly above average monsters-from-a-parallel-dimension B-movie. The Walking Dead had the potential for greatness, and is still very enjoyable, but it's doubtful whether anything Darabont makes will ever reach Shawshank-like levels of greatness.

I'm not normally a huge fan of classic musicals. I quite liked West Side Story, but couldn't abide The Sound Of Music, so my hopes weren' exactly high for this 1954 classic of which I knew very little, other than there were presumably at least fourteen characters. I'm relieved to tell you that not only did I not find this film terrible, I frickin' loved it. 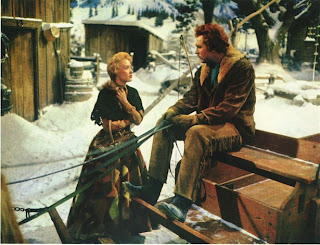 Set in 1850's Oregon, the film predominantly follows Adam Pontipee, the eldest of seven brothers (duh) who all live away from society in a secluded shack, as woodsmen. Whilst visiting town to trade, Adam sets out to find a wife, and somewhat surprisingly the local cook Milly agrees to take the position, and they marry as soon as she finished her chores, before heading back to his house. Once home, Milly discovers the rest of her new husband's clan, whom he'd neglected to tell her about before, and soon finds herself playing Snow White for these seven giants, doing all the cooking and cleaning in their initially disgusting hovel. When the other boys decide they too would like a wife, Milly steps in to see if she can teach them to be gentlemen.