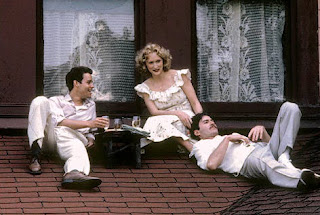 The unfortunately named Stingo (Peter MacNicol) moves from his southern home to be a writer in New York. He rents a room in a house, and so finds himself firm friends with a neighbouring couple, Sophie and Nathan (Meryl Streep & Kevin Kline). Sophie and Nathan have a tumultuous relationship, as she has a tragic past and he has issues of his own, and slowly Stingo learns of their history, and the hardships Sophie has had to endure.

In the world, there are happy films. They are stories about underdogs overcoming adversaries, battling against hoards of naysayers as they set out to win the court case/football game/heart of the cheerleader. The kinds of films where, upon finishing, you punch the air and yell something, just to join in the triumphant atmosphere. And then there's Sophie's Choice. Watching this film is like receiving one punch to the gut after another, rounded out with a swift thwack to the head with a two-by-four. It's like watching Schindler's List whilst listening to country music and drinking a glass of orphan's tears. If you have a big grin plastered over your face after watching the film, I'm guessing you wouldn't have been out of place in the Hitler Youth back in the 1940's. The happiest parts of this film occur between the three leads as they enjoy a life of carefree wonder, visiting Coney Island dressed in period garb, but even these moments have the rug pulled out from them eventually.

As with many films on this list, I have a history with this movie. I'd heard it was good, so I borrowed a copy from my Grandad - a copy he'd got free from a Sunday newspaper and never intended to watch, yet he still required it returned after I watched it. Free DVDs don't tend to have much in the way of DVD extras, up to and including DVD menus. In fact, most will just play straight out, without you needing to touch a button. In fact, I've watched one before that didn't even have chapters. I tried to skip back to catch a line I'd missed, and ended up back at the start of the film, and had to fast-forward to the scene again. What a time we're living in. Anyway, Sophie's Choice was such a film that had no extras, just a big old 'PLAY' button. I'd heard that, for Streep's Oscar-wining performance she'd learnt Polish and German for the role, which was not something I'd given a second thought to until, over halfway through this 2 1/2 hour film, there's the first of a few flashback sequences of Streep's Sophie in WW2-era Germany, and the DVD had no subtitles, leaving me to attempt to watch and understand what are probably the more famous and pivotal scenes of the film, without the aid of knowing what anybody was saying. To the actor's credit, for the most part I think I understood it, but still. I've known someone to go through a similar situation with Vicky Cristina Barcelona, but that was their fault for watching an illegal download. 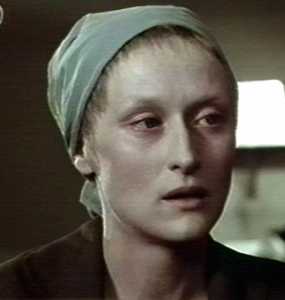 There are some actors who have a very famous role that they simply cannot overcome for some people, or in this case a role they've only played once but that has been seen many times. For me, Peter MacNicol will always, and only, be Dr. Janosz Poha from Ghostbusters 2. The mild-mannered southern writer Stingo doesn't stand much of a chance against Janosz, seeing as he's given very little characterisation here, but then this isn't his film, he's a cypher through which we get to know Sophie. This film belongs entirely to Meryl Streep, whose performance is just as good as it's ever been suggested. No superlative can be left unused when describing the levels she goes to, mentally, physically and linguistically, to completely transform herself into the concentration camp surviving Sophie. Her accent is spot-on, and you completely forget you're watching Meryl Streep. If it weren't for Kline and MacNicol sharing the screen with her, I'd occasionally have sworn it was a documentary. I'm guessing that Julie Andrews, Jessica Lange, Sissy Spacek and Debra Winger, the other Leading Actress Oscar nominees that year, didn't even bother showing up to the ceremony. Not only did she learn Polish and German, but Streep goes so far as to convince that they are her first languages, as she trips and stumbles her way through near-broken English, whilst during her flashbacks of the camps she looks to be several days passed Death's door with her pallid skin, sunken eyes, roughly shaved head and frail, skeletal frame. This performance should be mentioned in the same breath as DeNiro in Raging Bull. It's hardly a surprise that the rest of the cast pale in comparison.


It's a shame then that her performance is the only outstanding part of the film. I had an understanding of the meaning of the title before watching, so assumed it would play a large focus in the film, but it is only at the climax that we see the pivotal scene, and it's very nearly glossed over. We get a sense of the ramifications and the how it has made Sophie who she is today, but it eventually turns out that the choice she made would have made absolutely no difference anyway. As a story detailing the personal effects of concentration camps and World War 2 this is compelling, yet there are too many detours to detract from the story in an attempt to lighten the mood - Stingo's date with the nymphomaniac Leslie Lapidus (Greta Turken). There are some nice comparisons between the camp prisoners and the guards - an officer's daughter complains about the lack of a heated swimming pool.

The film also falls into two of my bigger pet peeve pits, in that a 28-year old MacNicol, who looks about 35, is playing a 22 year old, and at a couple of times there are phone conversations where the person on the other end is almost inaudible, but not quite, so some volume control had to be undertaken.

Despite possibly the greatest acting performance ever, this film is unfortunately let down by an incredibly depressing plot and an unsatisfying ending. There's no doubt it'll stick with you for a long time, but I highly doubt you'll ever want to watch it again.