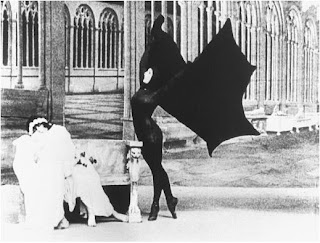 If acclaimed (though not be me) surrealist master Luis Bunuel is a fan of your work, it’s fair to say it’s unlikely to be a straightforward police procedural picture. The likes of Zodiac and All the President’s Men are probably far too logical for him to have admired, with far too few poisonous rings, hidden cannons and magic anagrams for his liking. That, and they aren’t 10-part silent serials from 1915, as is the case with Louis Feuillade’s Les Vampires, following newspaper editor Philippe Guerande and his flamboyant sidekick Mazzamette as they attempt to track down the notorious criminal gang known only as the Vampires, led by an ever changing Grand Vampire and his muse, the most interesting character of the series, Irma Vep.


In this world nothing is ever as it seems, with walls and paintings sliding aside to reveal hidden compartments (occasionally containing cannons), Vampires revealing themselves to be policemen, figures of authority revealing themselves to be Vampires and the dead returning back to life. This does become irritating, as logical second-guessing of the plot becomes impossible when it makes up its own rules as it goes along, but the sense of ingenuity keeps things interesting throughout the almost 7 hours runtime. I’m grateful too that modern architecture has advanced to a stage where most exterior surfaces are now only scalable using a ladder, whereas here they seem designed by the people behind Assassin’s Creed.