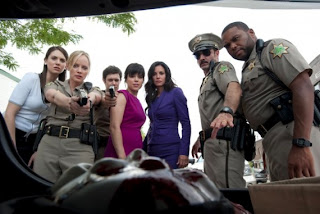 I wrote in one of my first posts aaaaaaaaaaages ago that I was really looking forward to this film, as I loved Scream and Scream 2, and enjoyed Scream 3 enough to justify owning it, but when the reviews came out and Scream 4 was deemed something of a failure I became lukewarm to the idea, and have put off watching it until recently. I went in with fairly low expectations, which is probably the best approach to take if you want to enjoy this film.

The problem with the Scream franchise, and indeed with pretty much every horror series, is that it tells the same story every time. Yes, a new batch of barely-characterised nubile young hotties is brought in to be creatively slaughtered, and at least with these films the killer changes each time, but the motive always seems to be the same and it's always someone you're not supposed to expect, meaning you work out who the killer couldn't possibly be, and then you've solved the mystery.

It's not difficult to see why the surviving leads from the series, Neve Campbell, Courtney Cox and David Arquette, have returned, seeing as none of them has had a very successful venture since the last movie, and the likes of Emma Roberts, Hayden Panettiere, Rory Culkin and Adam Brody were probably only too willing to work with Wes Craven, the legend behind the original trilogy as well as A Nightmare On Elm Street, The Hills Have Eyes and The Last House On The Left.

The plot sees Sidney Prescott (Campbell), the key surviving victim from the series, as she returns back to her home town of Woodsboro 15 years after the original murders to promote her new book, where Dewey (Arquette) is now sheriff and married to Gale Weathers (Cox). At times it's more than a little awkward to see Cox and Arquette working together after their divorce, as they've lost that spark of chemistry present in the earlier films. Coinciding with Sidney's return, a new killer is murdering random victims, and seems to be doing so by following the rules set by modern horror multi-sequels. This time amongst the knife-fodder is Sidney's niece Jill (Roberts) and her friends, as well as movie nerds and audience cyphers Charlie and Robbie (Culkin and Erik Knudsen).

Seeing as the antagonists murder weapon is a big knife, the kills here can never be all that inventive. It's more a case of where the killer jumps out from and who is behind the mask more than how will everyone die (hint: by being stabbed). The film has now surpassed it's previous level of satire and whip-smart semi-parody by becoming overly self-deprecating, with the multi-layered opening being a prime example of how silly it has become, and how little the film cares about the kind of emotional attachment the audience is willing to put into the characters and plot. The ending makes sense within the film's universe, but only because it's frightfully similar to that of the three films before it.

If you enjoyed the previous films, and heaven knows I did, then chances are you know what you're getting yourself in for here, and won't necessarily be disappointed. If, however, you're looking for the series to get a kick start and head off in a new direction, you'll find it sadly lacking. This was intended to start another trilogy, but somehow I don't think that's going to happen.