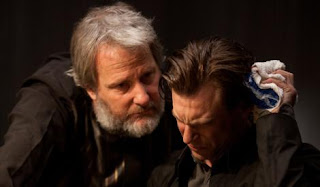 Regular readers will know I've had a tumultuous relationship with Looper, the third film from writer/director Rian Johnson. I loved Brick, and even wrote a post expressing my excitement and fears for the upcoming film, but alas when I went to see the film the first time around I passed out half an hour in, for reasons as yet undetermined. There's an entire team of doctors and medical students currently scratching each others heads just trying to work out what - or rather, how many things - are wrong with me. But failing to fully see the film first time around gave me an opportunity to see The Brothers Bloom, Johnson's second film, before watching the rest of his third. I have now managed to successfully see the entire film, in one sitting, having paid for a total of four cinema tickets (me + girlfriend first time around, me + friend second time around, Aisha didn't want to see it again). And, personally, I think it was worth it.

Joseph Gordon-Levitt plays Joe who, in the year 2044, acts as a looper, a man tasked with killing and disposing with the bodies of people sent back in time from thirty years in the future, where time travel has been invented but immediately outlawed, and is only used my the mob. Going in, that was as much information as I knew, other than Joe's future self, played by Bruce Willis, gets sent back for young Joe to kill, but promptly escapes and causes havoc for all and sundry. Also, Emily Blunt, Jeff Daniels and Paul Dano all fitted in there somewhere. This limited amount of information sent my mind reeling on all kinds of directions for the film to take, with the most likely one being Young Joe and Old Joe teaming up and fighting against the men that sent Old Joe back in a classic Bruce Willis action movie style, but it turns out I couldn't have been more wrong, and the twists this film takes were ones I was in no way prepared for, but were so much better than I could have thought up.

There were some areas I initially wasn't overly keen on, like the fact that approximately 10% of the population in 2044 have developed mild telekinetic abilities. However, this becomes more integral to the plot and, whilst it does take a little out of the realism (as realistic as a film about assassination via time travel can be), it pays off at the end. 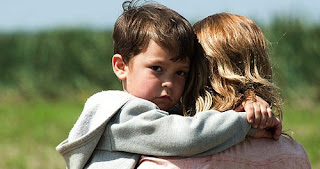 The performances are to a person all perfect. Gordon-Levitt spends the first half doing an impeccable young Bruce Willis impression, which was a little distracting at first, as were the fuller-of-face prosthetics he wore, but once it settled down it was an amazing achievement. Every smirk, stride and eye-glint was performed perfectly, making the transformation of Levitt into Willis entirely believable. Willis is also great, the best he's been in a long time, and plays a role that goes places I've never seen him go before, many of them quite dark. Emily Blunt shows off an impressive American accent and Jeff Daniels shines more here than ever, possibly even beating his Dumb and Dumber performance. As Abe, boss of the loopers, he gives a laconic, almost Dude-like performance worthy of the namesake who landed that particular role. But if I had to hand the film to someone, it'd be Pierce Gagnon as Cid, son of Blunt's Sarah, who is downright terrifying, more so than most children.

I think the real strength of this film is in the conversations. There are several one-on-one sit-down-and-talk scenes throughout the movie, and I think these are the best bits. Whether its Young Joe and Abe, Cid and Young Joe or the highlight, Young and Old Joe in a diner, the dialogue and performances are really given the time to shine in these moments. Elsewhere, the effects and action are also great, and Bruce Willis does get a chance to kick some ass, if only briefly. It's probably in his contract. There's enough humour to stop it getting too heavy ("I'm from the future; go to China.") but this is far from a comedy, sitting more in the thought-provoking sci-fi action drama genre. 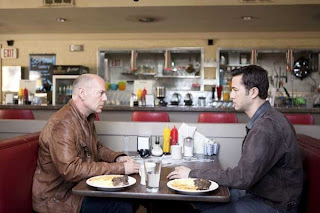 If I had to compare the film to something else it'd be Inception. Both are big budget crowd-pleasing blockbusters that have done rather well at the box office, yet prove that to be such a thing you don't have to be mindless and inane, relying on cheap thrills, jump scares, excess nudity and giant explosions to keep entertained. They can be intelligent and character-based, with a clever script that doesn't hold back or dumb itself down for the lowest common denominator.

So was there anything I didn't like? Well, there's an early scene I call the 'Fingers Scene' which I cannot watch because it deals with an oddly specific fear I have, and annoyingly it's one of the few moments I've now seen twice (although second time around I determinedly stared offscreen and switched off my peripheral vision). There's also a couple of minor paradoxes that are all but impossible when making a film about time travel, and to be they aren't really plot holes as much as they're open-ended and up for discussion, which I'm more than happy to take part in. Oh, and if you want to have a tense experience watching a film, go and see one after you passed out in it the first time, for reasons unknown. I nearly passed out again from the anticipation.