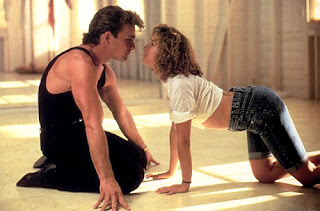 We recently booked tickets to see this on stage at the Mayflower theatre in April (not my idea) and I’ve never seen the film. I know, shocking. I’ve seen Crazy, Stupid Love, so I figure I’d seen the important bit already, but enough goddamn Empire readers voted it onto the top 500 films list that I had to see it. Motherfuckers.

It’s the summer of 1963, and Wayne Knight is working as an entertainer at a holiday camp. He makes a deal to steal some dinosaur DNA hidden in a shaving foam can and smuggle it out during a storm, but doesn’t bank on a dilophosaurus with a penchant for fat, sweaty guys. Some kids nearly diea few times, Laura Dern gets terrified by Samuel L. Jackson’s disembodied hand and a T-Rex eats Patrick Swayze whilst he lifts Jennifer Grey up in the air. Well you can’t blame me for dreaming, can you?
Alas, all we have here is a rather tepid story of a girl getting it off with her rather ‘hands-on’ dance instructor at a summer holiday camp, whilst her parents would rather she dated a rich, boring guy instead. Before this film I’d only ever seen Swayze as a sinister paedophile in Donnie Darko, so to me he comes off as creepy and predatory, praying on the naive young dancer as they are forced together, Swayze’s sleeve-phobic Johnny Castle having to teach Grey’s Baby to dance professionally in a matter of days, so the relationship that built up between them may have appeared more Sordid than perhaps it was supposed to.
I’ll be the first to admit that I’m no dancer – mainly because that means I don’t have to dance – so any dancing seen on film is lost on me. I can’t tell when people are dancing well, or even in time, so showing long routines or montages of improvement have a similar effect as me listening to someone gradually improving their Cantonese.
Grey is a terrible actress – her miming to Mickey & Sylvia’s Loverboy is excruciating, and the most famous line in the film (some crap about a corner) is tossed away so haphazardly I doubt it would have been missed had it been cut.
Anyone want to buy a theatre ticket?
Choose life 3/10
Posted by JayCluitt at 17:09