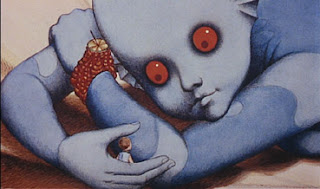 On an alien planet, a race of gigantic meditating blue-skinned, red-eyes creatures known as Draags keep humanlike Oms as pets. To the Draags, Oms are no bigger than beetles, and are treated as playthings or pests, with the many wild Oms being routinely killed every three cycles (15 years) to prevent an uprising.

The world these creatures inhabit is, quite frankly, insane, inspired by both Stefan Wul’s novel and a large dose of narcotics, and has been created with a simplistic Python-esque animation style, with a heady dash of Dali thrown in for good measure.
It’s interesting to see that real-world parallels have been drawn, with the two races facing issues familiar to those of us on Earth – warring tribes, religion vs. science, giant flying anteaters – but why do those goddamn horny continental Europeans have to make everything about sex? Look out for the overly-phallic rockets late in the film.
Some plot points are dismissed too easily without realising their full potential; the magnetic homing collar, for instance, the scales are inconsistent, too much emphasis was put on creating a surreal landscape over an engaging plot and some scenes are far too trippy – the meditation involving wall and ceiling probes transforming the Draags colours and bodies – yet perhaps to an outsider our world would seem equally as bizarre.
Choose life 6/10
Posted by JayCluitt at 19:18