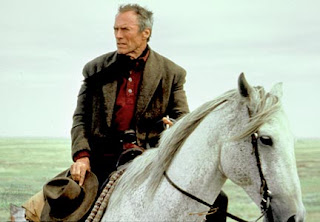 The first part of my double bill of Clint-Eastwood-directing-himself-and-Morgan-Freeman-in-a-supporting-role sees the American icon define the genre that not only made him the prolific star he is, but that he has almost singlehandedly kept alive since it's surge in popularity in the 60s and 70s; the western.

Unforgiven sees Eastwood as William Munny, a former hardened killer reformed by the love of a good women and the birth of his two children. With his wife dead and their herd of pigs stricken with fever, Munny accepts the offer from young upstart The Schofield Kid (Jaimz Woolvett) to kill two ruffians who cut up a whore after she laughed at one of them having a small penis. They team up with Munny's former partner Ned Logan (Morgan Freeman) and head out to the town of Big Whiskey, lorded over by Gene Hackman's occasionally violent 'Little' Bill Daggett, where other hired killers, including Richard Harris' English Bob, are also heading to claim the bounty.

Eastwood's Munny isn't your typical western hero. In fact, no character in this can ever be truly classed as heroic. Munny has what could politely be called a sordid past, and his desperation to honour his late wife by not succumbing to his younger urges is evident. A self proclaimed no good son of a bitch, Munny is a shadow of his former self, unable to shoot straight or even mount a horse. Freeman's Ned has a woman at home, yet has no qualms about visiting the whorehouse in town, Schofield has his own secrets and Bob is an outright liar, gambler and killer. At times it seems that Little Bill, supposedly the villain of the piece, is possibly the most moral character here, opting not to kill the prostitute abusers in favour of fining them horses instead, with the sins he commits in the present are nothing compared to those done by Munny in the past, and his intentions are only to keep his town free from guns and violence, except from his own. I found it odd though that nothing was made of Freeman's race, as he and his partner are the only non-white characters in the film, yet there are no even passing references when the townsfolk describe him. I've just realised I'm annoyed that Morgan Freeman wasn't racially abused in a film.

The script, which did the rounds in Hollywood for 20 years before Eastwood picked it up, is pocked with sharp humour and great lines ("If I see you again, I'm just gonna start shooting and consider it self defence.") and works not just as a study and disassembly of the westerns that came before it, but as a damn good, prime example of one itself. Harris' English Bob has his own biographer (Saul Rubinek), whose role is to take Bob's stories and lyricise them a little; in essence creating the cowboy myths and legends that make up the staples of the genre. It's a film about shattered dreams and fallen heroes - the actors as much as the characters - as it's not often you see Eastwood rolling around in pig shit, Morgan Freeman asking someone if they sleep with prostitutes or just use their hand or Lex Luthor beating the crap out of Dumbledore. It's clear that Munny could quite easily be any one of Eastwood's previous stoic, bitter, hard as nails cowboys who'd let themselves go for a few years.

The film deals with the seriousness of death and murder, with no post-kill smart alec quips. One characters defiant "I'll see you in Hell, Willaim Munny," is met only with a considered, matter of fact "Yeah." It's almost as prolific as The Good, The Bad and The Ugly and Once Upon A Time in the West, and definitely ranks in the top 5 westerns.