Last week I took a look at some of the movies of which the general consensus is they are classics, but I don't necessarily agree. As promised, this week here's the flip side to that coin, the films that I love, but others may think I'm a little stupid for doing so. These are basically guilty pleasures that I really should know better than to enjoy, but that doesn't mean watching them can't stick a goofy grin on my face and make me forget whatever other crap is invading my life.

I'd argue with many people that this isn't actually a bad film, it's just highly implausible and tremendous fun, when a band of some of the most dangerous criminals in the world, led by John Malkovich's Cyrus 'The Virus' Grissom, take over the plane transporting them to a new prison. Nic Cage is our justifiably law-breaking Navy seal hero catching a ride home with his ridiculous hair, and John Cusack the only man on the ground who believes in him. The cast is as impressively diverse as the film (Ving Rhames, Danny Trejo, Mykelti Williamson, Dave Chapelle, M. C. Gainey, Colm Meaney) and Steve Buscemi plays a cannibalistic paedophile. Who (SPOILER) gets away. As in, he's free. In a casino, gambling, in public. We're told he once drove around wearing a young girl's head as a hat. Earlier in the film, he has tea with a little girl playing with a doll, and later we see a smashed tea cup, the girl nowhere to be found. So, presumably he killed her, possibly eating her? This is the oddest scene to put into an action film, especially when you consider Buscemi's Garland Greene isn't in the top 3 antagonists! And did I mention he gets away? And no-one seems to be looking for him? 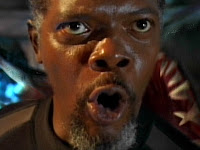 4. Deep Blue Sea
Essentially Jurassic Park with sharks instead of dinosaurs (Jurassic Shark?), a higher tollerance for blood and Saffron Burrows instead of Richard Attenborough, this movie has no real reason to be watched more than once, but a decent C-list cast (if you're feeling generous) and some inventive deaths, considering they're mostly all by sharks, makes this genuinely entertaining. Putting Samuel L. Jackson in any film automatically makes it better, as is the case with Michael Rapaport and, bizarelly, LL Cool J, though Thomas Jane and the aforementionned Burrows do their best to sink this story of genetically modified, super-intelligent, 8,000 pound makos.

3. Daylight
Holding the position of my first ever favoruite movie (I got into films late) this Stallone classic sees his former paramedic going in alone to save the survivors of a collapsed New York tunnel. The group includes the typical microcosm of society you'd never find in an actual collapse; the tunnel employee with useful knowledge, a headstrong, capable, skinny yet inexplicably single girl for our hero to fall for, the elderly couple with their beloved dog, as well as a famous adrenaline junkie (Viggo Mortenson) and a bus-load of convicted felons for good measure. Stallone's name alone, Kit Latura, should have been enough to make this a direct-to-video Van Damme film, but I've loved it's lunacy and predictability since before I knew who Sly was.

2. Final Destination Series
Of all the seemingly endless horror franchises, why is this my favourite? Well it can't be Halloween, as I've only seen the first one, A Nightmare on Elm Street gets far too campy and ridiculous after part 1 and I've unforgivably never seen any of the Friday the 13th saga. The Scream series is good but relies too much on twist endings, and the Saws are a tad too gory for my liking, but there's something about Final Destination that makes me not care that they're essentially making the same film over and over again, with only a moderate twist each time. It's also probably because there's no actual killer stalking the barely-characterised victims, it's merely death himself. The first film occasionally portrayed this entity as a self-aware blue liquid, and actually caused at least one of the deaths, but later films did away with this completely. Part 2 holds a special place in my heart purely for the death-by-fence shot, of which a screenshot was my desktop background for some time. 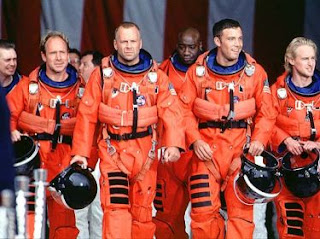 1. Armageddon
Ah, Michael Bay, you probably could have filled this entire list. I don't hate you like the rest of the Internet, for I never knew of the Transformers until you came along, so what little childhood I had has remained unmolested by you, but watch what you're doing with TMNT. Armageddon is surely your crowning glory, for the sheer audacity of, in one scene and a couple of lines of dialogue, suggesting it would be easier to train drillers to be astronauts than astronauts to be drillers. The longest Aerosmith video in history, Armageddon sees Bruce Willis and his rag-tag team of regular, blue-collar guys (including Steve Buscemi, Michael Clarke Duncan, Owen Wilson and Ben Affleck) sent into space to blow up a meteor the size of Texas, by drilling into it 800 feet. None of the physics in this movie makes sense, the script is beyond cringey at times and there are several moments when all of humanity is put at risk for no real reason. William Fichtner and Peter Stormare, together 8 years before season 2 of Prison Break, are great as the pilot and Russian cosmonaut encountered along the way, but Liv Tyler is too lip-quiveringly vapid to do anything but simper and annoy. Still, I will happily watch this movie given enough time (twice this year so far) and I'd happily and proudly put it in my favourite 20 films.

Godzilla - It's such a terrible film, with so many problems, the least of which is they can't seem to decide how big the goddamn creature is, but there's been more than one occasion where I've been in a shitty mood and looking at a fairly unproductive evening because of it, but I've stuck this on and ended up feeling a lot better. It can't be explained, it just happens.

Evolution - I'm a bit of a nerd (shock horror) so a science-based comedy with not-bad CGI and Stifler singing You Are So Beautiful to a giant bird-lizard attacking a mall never fails to make me happy.

Die Hard With A Vengeance - The first Die Hard film I saw, for a long time I held it in higher regard to the original. Fear not, I now know my mistake, but John McClane teaming up with Samuel L. Jackson? Hell yes.

Rat Race - Have you seen the cast for this 2001 road trip comedy? Jon Lovitz, Seth Green, John Cleese, Cuba Gooding Jr, Amy Smart, Breckin Meyer, Whoopi Goldberg, Wayne Knight, Rowan Atkinson, Dean Cain and cameos from Kathy Bates, Gloria Allred and Smash Mouth? I was a stupid kid when I saw this on DVD, but it seems to have stuck with me.

Jersey Girl - Certainly no Clerks, but nothing Kevin Smith has made since his debut has come close to matching the original (Though Chasing Amy and Clerks 2 are pretty good), this was unfairly lambasted after the car crash of Gigli and the media black hole of 'Beniffer.' It's not the greatest rom-com in the world, but it isn't terrible either. And a children's version of Sweeney Todd the Musical? Genius.
Posted by JayCluitt at 10:24