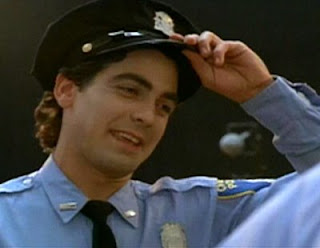 Given the cinematic journey I've chosen to peruse, I don't often get to watch truly terrible films. Sure, there are some on the 1001 List that I'm not necessarily a fan of, but they tend to have some kind of artistic merit or historical value that justifies their position. I also tend to make an effort to avoid films I think are likely to be awful, as I probably won't enjoy them, and there are so many other films I'm sure will be better. I think the last awful film I reviewed was Big Trouble in Little China, and that was only because Empire readers inexplicably voted it the 430th greatest film of all time, despite it having almost no redeeming features whatsoever. It was refreshing then, as I begin my exploration through George Clooney's career, to go out with a mate, have a few drinks, plays some Call of Duty and settle in to watch this goddawful slice of tripe.

The plot is reminiscent of Scream 3; a film crew is shooting a horror movie based on the killings that occurred in a school some years earlier. To add to the realism, they are shooting the film on the site of the school, and some of the parts are being played by the people involved in the actual event. A few days later, a police investigation is being undertaken as almost everyone involved in the film has been found dead outside the school, except for the writer, who is recounting the tale to two police officers. This scenario has potential to be a half-decent horror flick, I mean I've heard a lot worse, but alas this is not the case, as what little plot there is deteriorates into a hashed up mess fairly early on.

Clooney, for he is the reason I'm watching this, has a miniscule role as an actor eager to break his contract early so he can start filming on a TV series.He succeeds in leaving his role, only to be killed moments later, in one of those moments where the intensifying score clearly signposts exactly what will happen. You know, when they're walking down a dark corridor, and the ominous music only plays when they're slowly making their way forward, then the music stops when they do. To be honest, it's probably for the best that Clooney died when he did in this film, his hair is atrocious. 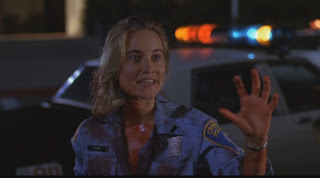 As far as I can tell the rest of the cast is of little note - hardly surprising when you look at the acting on show - with the exception of Maureen McCormick, whose turn as a cop that becomes alarmingly aroused by dismembered body parts proves to be all the more bizarre when you discover she played Marcia Brady on The Brady Bunch. Now I've never seen that show for two reasons: a, I've always lived in the UK, where I'm fairly sure it's never been aired, and b, I'm under the age of 35, but I'm fairly sure Marcia never came on to her superior officer after discovering a severed arm, or clawed seductively at her blood-splattered breasts whilst she retold her exploits involving sliding down a gruesome hallway.

My main problem with the film was the plot, especially the last ten minutes, which features not one but two of the worst twists I've ever seen. The first, involving a Mission Impossible-style removable face mask, is ridiculous enough, but the second is of such sweeping idiocy that it beggars belief, and doesn't withstand even a second's worth of examination. Up until that point I had forgiven most of the film's other flaws - of which there are many - on the basis of the director's lack of experience (this is his only film credit) and budgetary reasons (although great films have been made for far less than this film cost), but the film's ending is just so ridiculously inane that it turned me off the rest of the film completely.

So what else is wrong with it? Well, it uses the age old filming-a-scene-but-not-telling-us-they're-filming-a-scene schtick at least three times, and the it's-all-a-dream thing once, there's a sex scene illuminated by someone welding something quite far away from the first floor window of the room in which the coitus is occurring, no-one actually finds the bodies mounting up, yet people are clearly scared of a suspected killer they have no reason to suspect, and there's one of the worst uses of a Schwarzanegger-esque one-liner I've ever seen ("Class dismissed.")

On the plus side, the script the script does have some gems, including a conversation about explosive breasts ("There will be no exploding tit shot!") and possibly the greatest worst special efect I've ever seen in a shot of an axe beheading someone in silhouette through a frosted glass door, with the axe swinging down, followed wiftly by a clearly fake head being thrown far too enthusiastically up in the air. Needless to say, my friend and I were in stitches at this, and it received a good few rewinds before we were done. If I knew how to embed mpegs you'd be watching this for the rest of the day.

So, all in, this is one of the worst films I've ever seen. At times it wanders into so-bad-its-good territory, but for the most part it's just terrible. I will not be returning to Horror High any time soon.