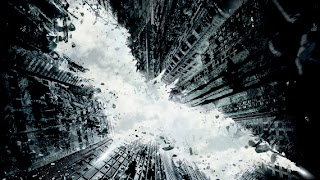 Just to let you know, like the rest of the world, I have seen The Dark Knight Rises. I saw it opening night, over two weeks ago, but haven't written a review yet for two reasons: 1, I haven't had time, and 2, I didn't really have anything to say that everyone else hasn't already said. So, I'm not going to review it yet. What I am going to do is wait until it comes out on DVD, buy it, watch it again, and then review it. Simple. Hopefully by then everyone will be over the inundation of Batman reviews. In the meantime, here's my quick thoughts on the film:


With all those negative points, you'd be forgiven for thinking I didn't like it, but honestly its a lot better than most other films, and was in no way as big a disappointment as Prometheus. I shall definitely add it to my DVD collection, but alas I'm still looking for that elusive film that I'm willing to pay to see at the cinema twice. I've heard that this is one of those films that's better the second time around, and I genuinely hope this is the case. Expect a more detailed review in the next 12-15 months.