For the first instalment of what will hopefully become a weekly addition to my little corner of the Internet, I’ve decided to look at some other first starts, namely the best first pictures of notable directors. These lists will only ever be made up of films that I’ve actually seen, so if there’s any glaring omissions (sorry, when) then chances are I haven’t caught up to it yet, or I dislike it for some ridiculous personal reason, like it stars Uma Thurman or doesn’t feature Steve Buscemi. If anyone disagrees with my choices please let me know, I’m always eager to discover new films. Oh, I’m not taking into account films made by people who haven’t done anything since, or anything good at least. I’m anticipating another top 5 in the future of One Hit Wonders. Also, I'm not going to go into great detail on these films, as most of them appear on the list. If they don't I may make an exception.

5. The 40-Year Old Virgin (Judd Apatow)
Apatow has been involved in some way or another with most of the funniest films of recent years, be it as writer, producer or director, and The 40-Year Old Virgin is one of the best, and was the perfect vehicle to shoot eternal nice guy Steve Carell out of the sidelines and into leading-man status, a placing ruined two years later with Evan Almighty. Appallingly, this film isn’t on the list, but it really should be for the camaraderie of the supporting cast, and the never-ending I-know-you’re-gay routines.

4. This is Spinal Tap (Rob Reiner)
Reiner has a rich and varied CV including fantasy/comedy (The Princess Bride) political romance (The American President) and tense thriller (Misery), but it all started with this greatest of the mock-docs, following the bumbling rock band as they navigate their way around a tour. Reiner’s made some stinkers recently though (Rumor Has It, The Bucket List) so he needs to find his game again.

3. American Beauty (Sam Mendes)
American Beauty came out of nowhere to land its director, actor, cinematographer, producers and writer all Oscars, and rightly so, for Kevin Spacey gives the performance of his career as self-destructive mid-life crisis sufferer Lester Burnham. Resplendant with a terrific ensemble cast, incredible script and terrific whodunit ending, Mendes may seem an odd choice for the next Bond film, but here’s hoping it proves interesting.

2. Monty Python and the Holy Grail (Terry Gilliam/Terry Jones)
Something of a personal choice this, the first Python film is something I grew up with and means a lot to me, with John Cleese being a personal hero of mine. Gilliam and Jones both went their separate ways after Python, with Gilliam attaining a greater level of notoriety with the likes of Twelve Monkeys and Brazil, whilst Jones took solo direction on the seminal Life of Brian.

1. Reservoir Dogs (Quentin Tarantino)
Tarantino's debut stands up proudly against some of his better later pictures (Pulp Fiction, Inglourious Basterds) but remains a true cult classic. There isn't a weak link in the chain, with a stellar cast, wonderful script complete with some magnificent speeches and a solid sound track that gets a regular spin around my iPod.

Honourable mentions:
Shaun of the Dead (Edgar Wright) – whilst definitely an amazing debut, it’s a rehash of a lot of what he learned on the just-as-amazing Spaced.
Clerks (Kevin Smith) – a debut shouldn’t be a director’s best movie, and that’s definitely the case here. See also Frank Darabont’s The Shawshank Redemption.
12 Angry Men (Sidney Lumet) – one of the best films ever made, but it would have taken a lot to get the adaptation of the stage play wrong.
The Evil Dead (Sam Raimi)
Blood Simple (The Coen Brothers)
Night of the Living Dead (George Romero)

And the worst:
Charlie’s Angels (McG) 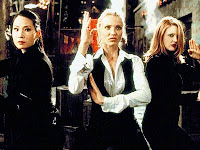 Hold on, this isn’t the worst directorial debut ever made (that’s probably something more like Date Movie) but this is a list comprised of directors who went on to make good movies, and McG is responsible for at least one in Terminator Salvation (I haven’t seen This Means War yet, it looks OK I suppose, though I’m not keen on Reese Witherspoon, but Tom Hardy is sooo hot right now). Who knows if this started the recent slew of unwanted remakes of outdated franchises (Bewitched, Land of the Lost) but it certainly didn’t help, and nor did the wafer thin plot, two dimensional characters and terrible script. Thank the heavens for the menfolk – Bill Murray, Crispin Glover, Tim Curry, Sam Rockwell – to add a little class.
Posted by JayCluitt at 13:10