Philip Seymour Hoffman is the recipient of this month's Acting School over at the LAMB. I'm trying to get a bit more involved with the Lamb (hence my appearing in two recent podcasts, and hopefully a few more in the future), so I figured I'd compile a list of my favourite of Hoffman's films for the school, which gets posted over at the LAMB on Monday.

I've always liked Hoffman as an actor, and not just because we're of a similar build, especially around the midriff. He's able to deliver a huge variety of performances, most of which I think I've covered in this list. And I'm aware there's a few of his more prominent films that I've missed off, but that's generally because I haven't seen them yet (The Master, for instance). And this is a list of his best films, not his best performances, so whilst he was thoroughly deserving of his Oscar for Capote, it doesn't appear on my list because as a film I'm not overly keen on it.

Hoffman has quite a few films that I like, so I'm breaking tradition and listing a few Honourable Mentions here. I quite like Charlie Wilson's War (but not quite enough to keep it in my draft of Tom Hanks' career on the recent Lambcast), in which Hoffman stole the show as the antagonisingly forward and impressively moustachioed Gust Avrakotos. The Talented Mr. Ripley is also pretty good, but mainly for Matt Damon's chameleonic performance. I watched Moneyball and Before the Devil Knows You're Dead this weekend, both to cross them off my Unseen DVDs list and to see if they deserved a place here, and whilst Before was well directed by Sidney Lumet (the last film he made before he sadly passed away), it just missed my top 10, and Moneyball just didn't grab me, mainly because I didn't have the slightest clue what anyone was talking about whenever the topic of baseball came up (which was quite often, seeing as it's a baseball film), and partly because of Jonah Hill, who is largely unbearable and thoroughly undeserving of his Best Supporting Actor Oscar nomination. I can't remember much about 25th Hour other than Hoffman and Barry Pepper being good in it, I didn't like The Ides of March that much, found Doubt boring and Synecdoche, New York to be too clever for it's own good. Patch Adams, on the other hand, is generally a winner in my flat, and remains one of my girlfriend's preferred background films. 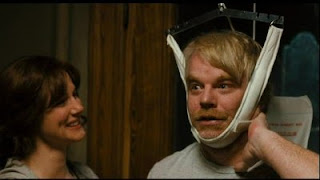 I know you're not supposed to judge a book (of film) by it's cover, but that's the only reason I discovered this film, when I spied the animated versions of Hoffman and Laura Linney adorning the box. The film itself is fairly low-key, seeing Hoffman and Linney's siblings Jon and Wendy trying to cope and deal with their father (Philip Bosco) as he descends into dementia following a scene where he smears his own excrement onto the walls of hi bathrooms, and it isn't all overly happy, but their is some gold in there. A screening of The Jazz Singer, featuring Al Jolson applying blackface, at a nursing home run by predominantly African-American carers is just slightly shy of my embarrassment limit. 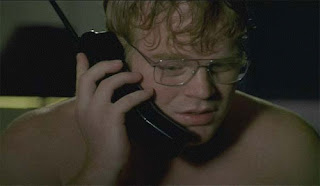 Todd Solondz's deeply black comic drama is a film that although I've only seen it once about five years ago, has remained with me because of the cavalcade of memorable characters and mentally disturbing images, such as a woman being licked on the face  by her dog, who has just consumed some of her son's ejaculate. Rest assured, when I cross this one from the 1001 list, I won't be watching it alongside either my girlfriend or any family members. The film follows the lives of three sisters and their various partners and quests for the eponymous mood. Hoffman is Allen, a sweaty, awkward, self-confessed boring guy who is also something of a sexual deviant, or at least he could be, if he could actually hold a conversation with the object of his affections, Lara Flynn Boyle's Helen. As it stands all he can do is call her on the phone and tell her that he's going to, and I quote, "Fuck you so bad you'll be coming out of your ears." Delightful. 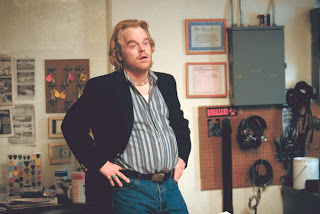 8. Punch-Drunk Love
Three years after directing his stellar Magnolia, itself released two years after another sublimely cinematic ensemble in Boogie Nights, you'd have been forgiven for expecting something similar in Paul Thomas Anderson's fourth feature film (I still haven't seen Hard Eight). Instead, we received a decidedly off-kilter romantic comedy, seeing Adam Sandler at his most introverted as the pudding-collecting Barry as he falls in love with Emily Watson and receives a mysterious harmonium. PTA regular Hoffman is my favourite part of the film, as with most films he is in, and here he plays an easily-aggravated phone sex line manager/mattress salesman, who engages with Barry in one of my favourite phone conversations heard on film, which has just been put on my list of potential top lists for the future. 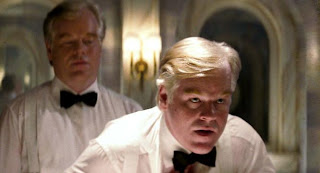 When it was announced that J.J. Abrams would be directing the follow up to John Woo's slightly disappointing Mission Impossible sequel, I was more than a little excited, because I bloody well loved Lost. Then, when it was revealed that Hoffman would be playing Ethan Hunt's new nemesis, arms dealer Owen Davian, I was completely sold and couldn't wait to see it. The film didn't disappoint, with several huge scenes (the bridge exploding is wonderful) and some great additions to the cast, including Jonathan Rhys Meyers, Lawrence Fishburne, Billy Crudup, Michelle Monaghan and the great Simon Pegg, who was the only one (I think) to reprise his role in Mission Impossible 4. Well, someone else did, but revealing who that was would be a spoiler now, wouldn't it. Hoffman is great too, not least in the scene where he must briefly act against himself, when Tom Cruise's super spy dons a Davian face mask.

6. The Boat That Rocked 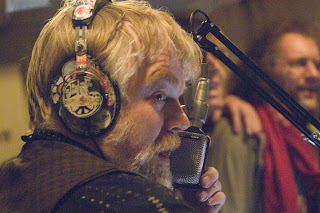 It wasn't as good as Love, Actually, but it was never going to be because that film is brilliant, but Richard Curtis' second British ensemble piece is still great, especially the soundtrack. The story follows a pirate radio station broadcasting all the best music that had been banned by the British government during the 1960s. Hoffman is the ship's sole American DJ, known as The Count, and he remains one of the most memorable, seeing off against Rhys Ifans' returning fan favourite Gavin, but the cake is taken by Nick Frost as a surprisingly successful woman-stealing lothario, and Bill Nighy as the ship's captain. 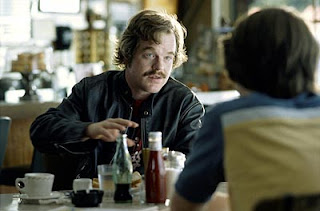 I wasn't alive in the 1970s, and I've never had a massive obsession with music, but even with both of these limitations I think it's impossible not to at least like Almost Famous. As with The Boat That Rocked, the soundtrack is amazing (the singalong of Tiny Dancer is a personal highlight that I can't help joining in with), but this is all about the coming-of-age tale of William Miller (Patrick Fugit), who has discovered he is a little younger than he always expected, but this doesn't stop him from going on tour with up-and-coming band Stillwater when he is commissioned to write a piece on them for Rolling Stone. Hoffman is the brilliantly named Lester Bangs, a music critic hero of Miller's and his rock-snob rants offer some of the best dialogue in the film, which also holds a special place in my heart for the depiction of William's relationship with his mother (Frances McDormand), which isn't dissimilar to that of the relationship I have with my own. This is probably the highest place a Kate Hudson film will ever get on a Best-Of list, unless my nightmares are answered and she is selected as a future Lamb Acting School candidate. 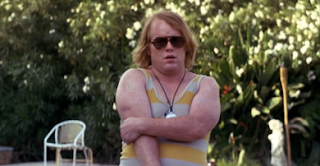 Before you have a go at me for not putting this higher, which I'm sure will be a popular opinion after reading the next entry, I've only seen this once, and am very much looking forward to seeing it again. Paul Thomas Anderson's epic about the story of porn, told through the eyes of wannabe star Dirk Diggler (Mark Whalberg) is great in my memory, but at present I just cannot say that I love it because it's been so long since I've seen it. I remember Hoffman being wonderfully creepy in a relatively small role as a guy who essentially stalks and wants to be, or at least be with, Diggler, but it'd be fairly easy to forget his performance amongst all the others on show, as well as Anderson's stunning camerawork. I don't mean to say he is bad in this, it's just that he isn't on screen too much, and the people that are give just as good performances.

Yes, Twister. I goddamn love this film, and not just because of the Universal Studios ride/demonstration that was one of the earliest times I realised I loved the magic of cinema. No, it isn't a great film. Yes, it's a simplistic, ridiculous story about a former stormchaser (Bill Paxton) rejoining his old team as they, um, chase storms, but this has always been a favourite of mine, possibly because I've seen it about 280 times. And Alan Ruck! Love me some Ruck. And Cary Elwes! As a villain! And exploding trucks! Wizard of Oz references! Helen Hunt thinking tornadoes are hunting her down! Yay! Hoffman is at his most loudmouthed and manic as Dusty, whose role within the group I've never been entirely sure of, but it generally involves being shabbily dressed and making Jami Gertz feel uncomfortable. Fun fact: this was the first film ever to be released on DVD. And that's where the surprises end. In making this list it has become clear to be that Hoffman thrives when part of an ensemble, either backing up a sole lead (Almost Famous) or as a smaller role in a sea of similarly sized performances, which is most definitely the case here. I don't think Hoffman has ever been as understated as he is here, playing the carer of Jason Robards' dying man, whose son (Tom Cruise, stealing the film) is a successful self-help guru specialising in teaching men to be more masculine, but wants nothing to do with his father. This features another terrific phone call scene with Hoffman, when he tries to order some men's adult magazines from his local supermarket in order to find the son's phone number. Nobody quite does squirming embarrassment like Hoffman. 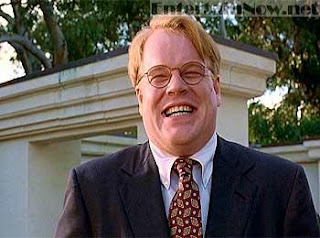 It is an uncharacteristically comic performance from Hoffman that tops this list because it's in a film that never fails to break into my top 20. As Brandt, the eponymous paraplegic's personal assistant, Hoffman gives one of his best, and smallest, acting displays that would have easily made it onto this list even if I were basing it on performance and not how much I liked the film overall. There's nothing I can say about Lebowski that hasn't already been said before, other than I love it, and I'm shocked that the entire script isn't on the IMDb Quotes page for the film.
Posted by JayCluitt at 19:32